Yes,  I'm seriously behind,  but it doesn't make the images any less appealing.  Most of the paintings sold,  but I do still have the cards.  The Garden images are particularly appealing to me right now,  as I have been working on a few articles about the meaning of the garden, with my brilliant husband. 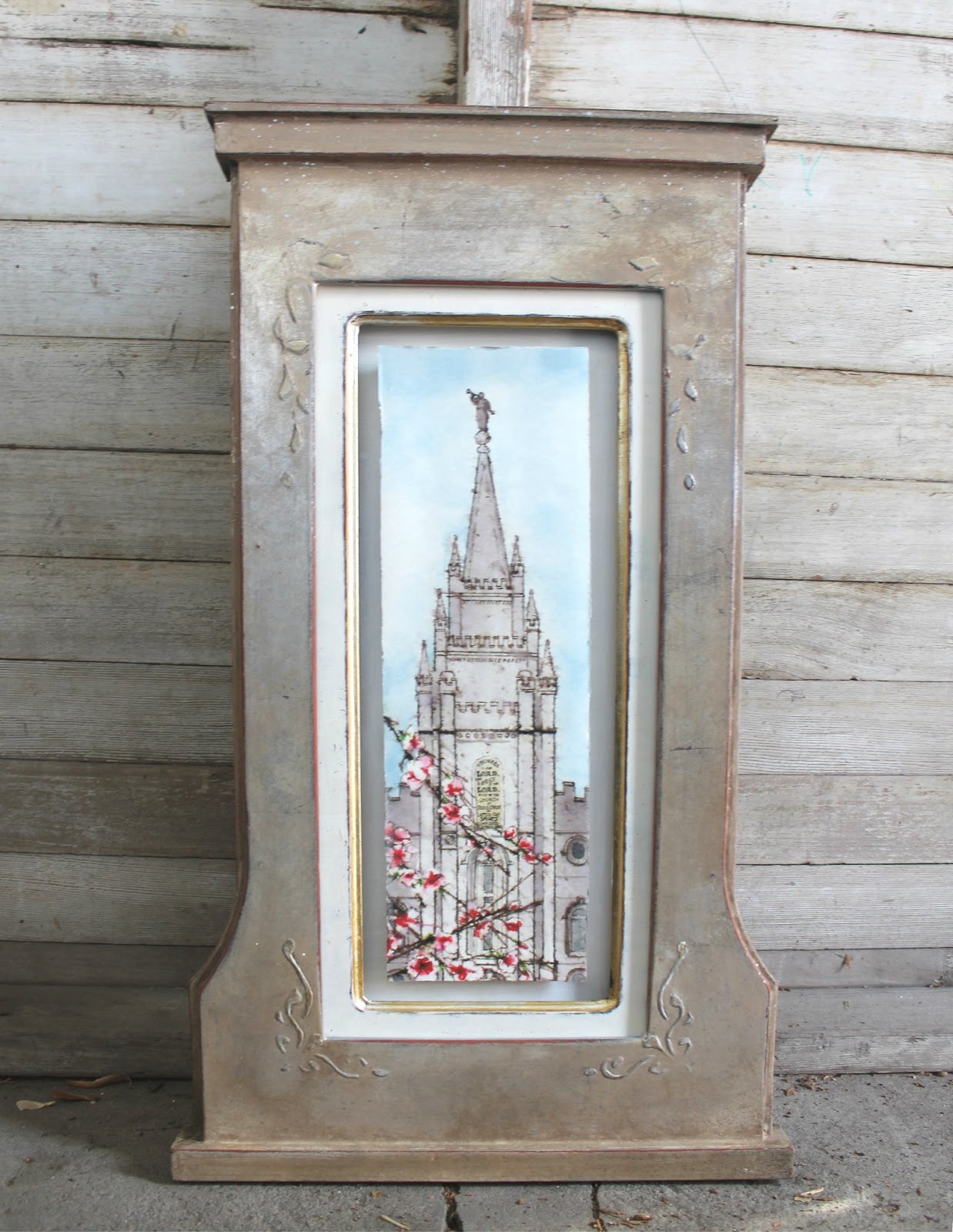 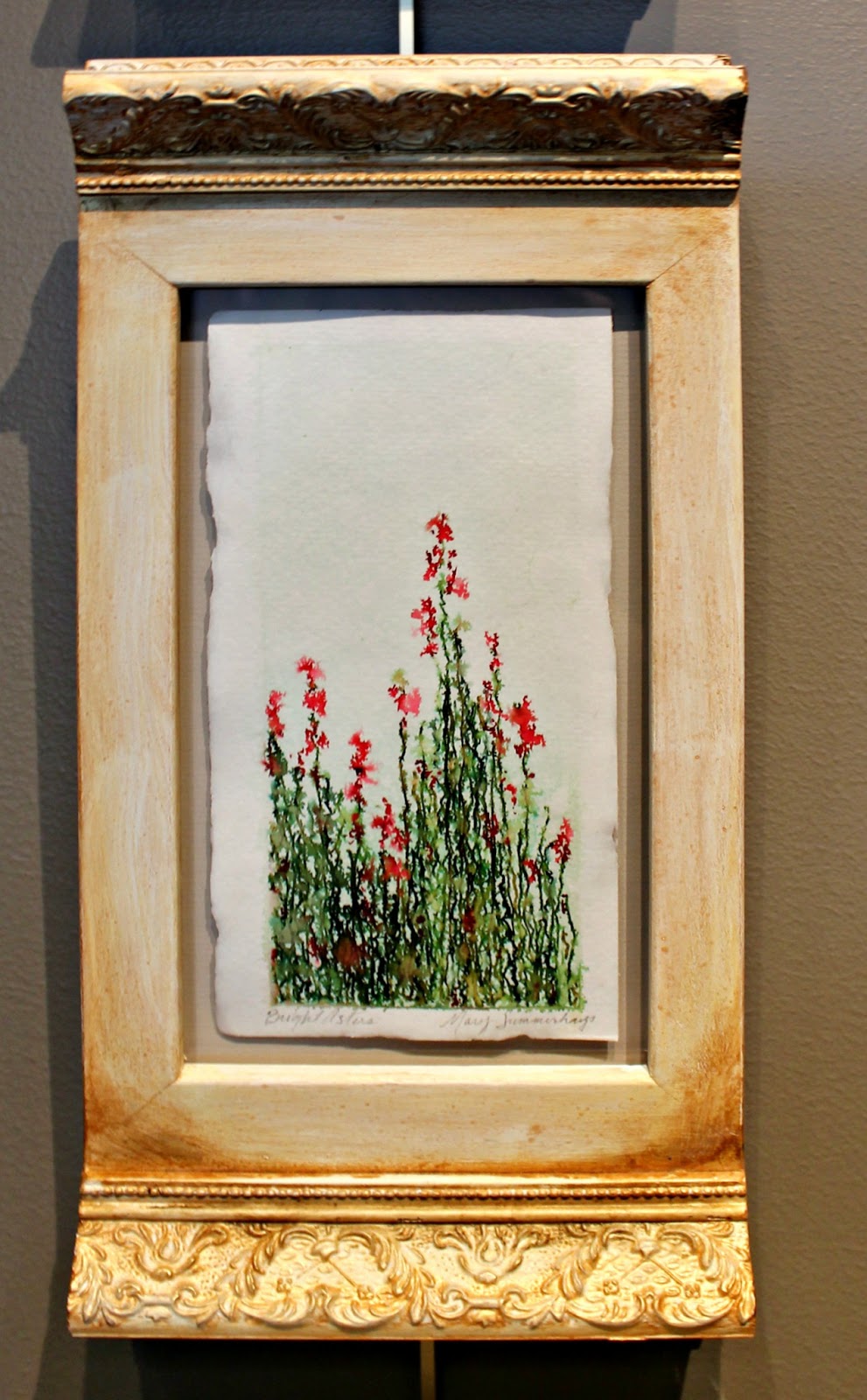 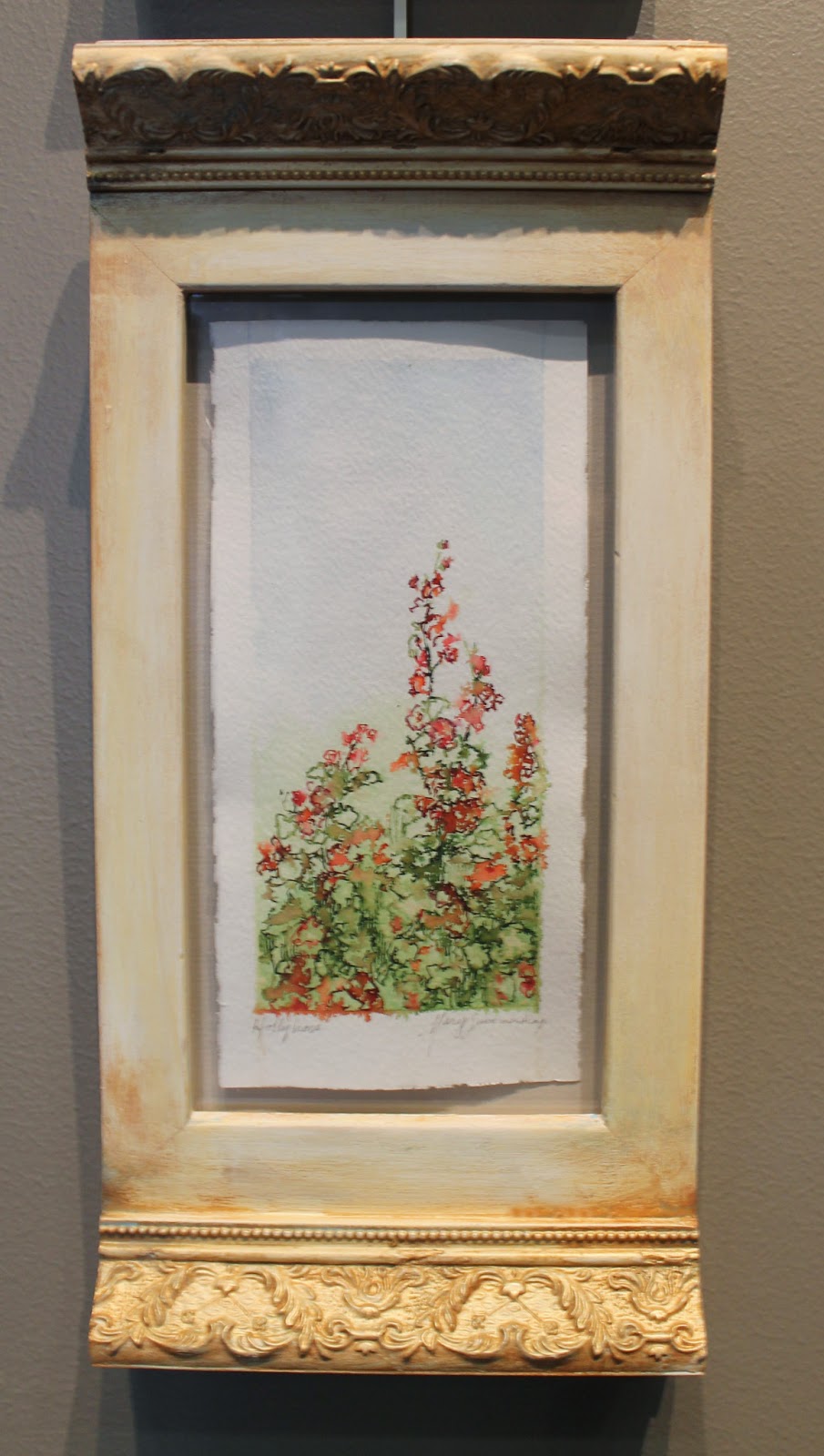 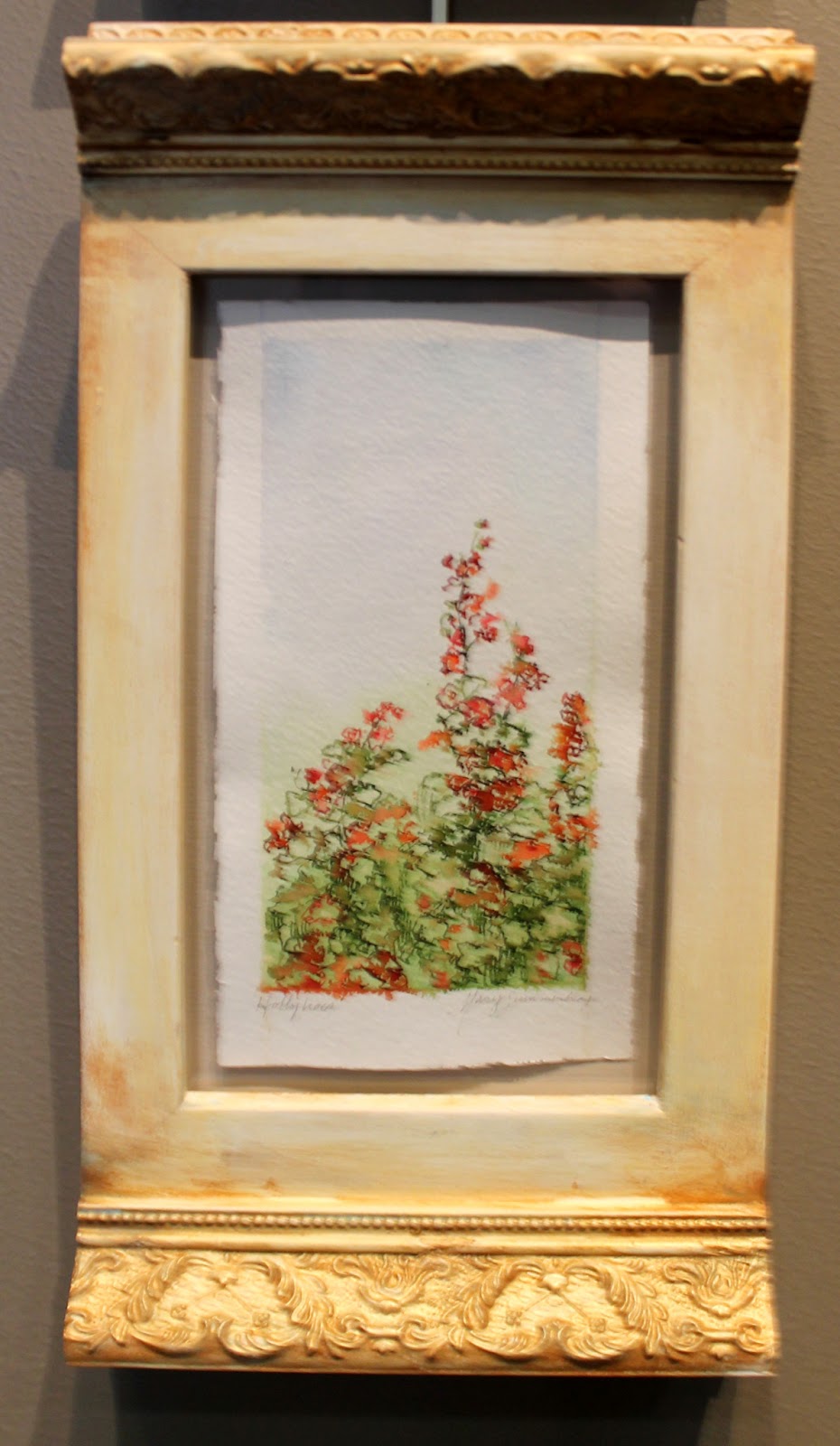 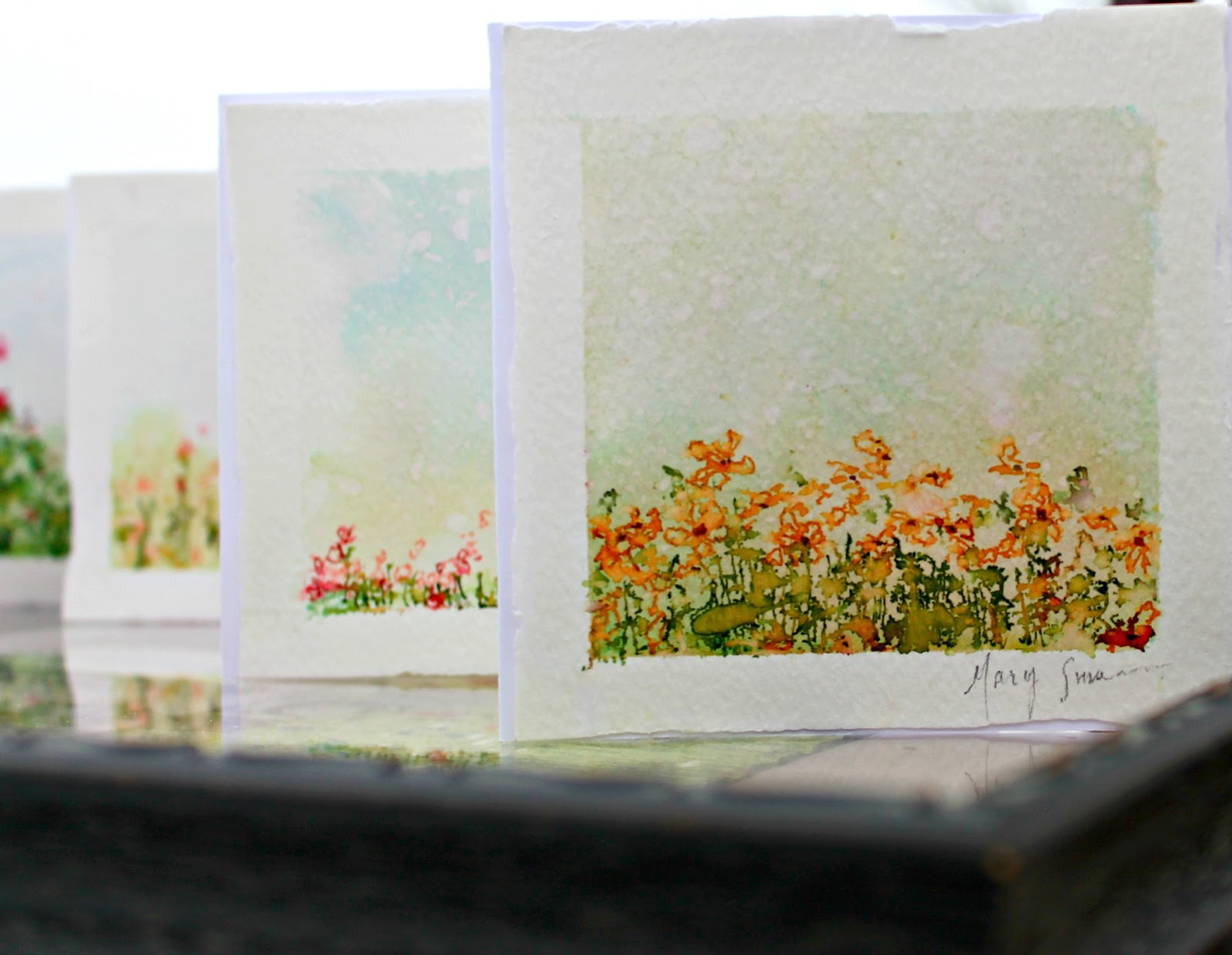 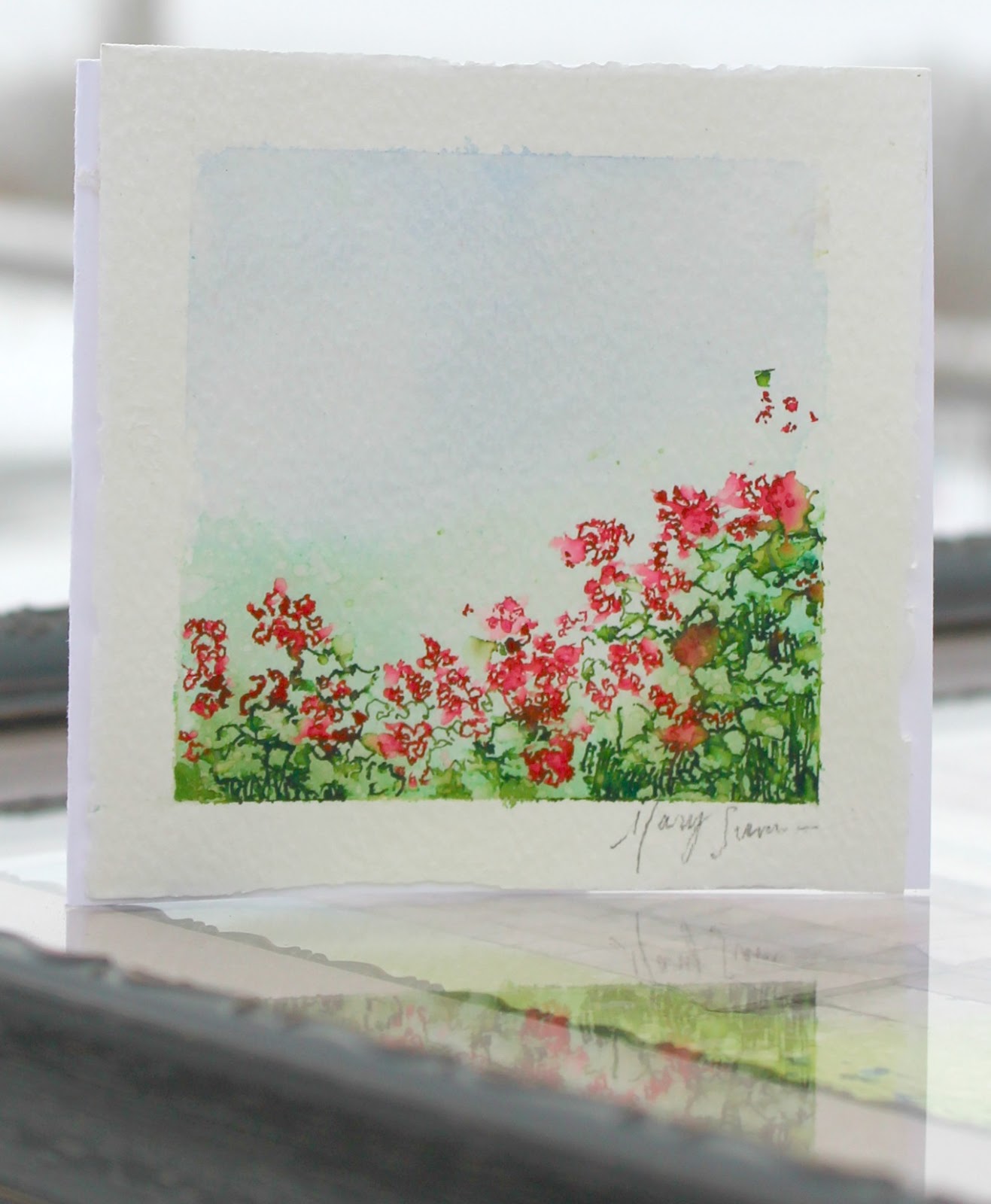 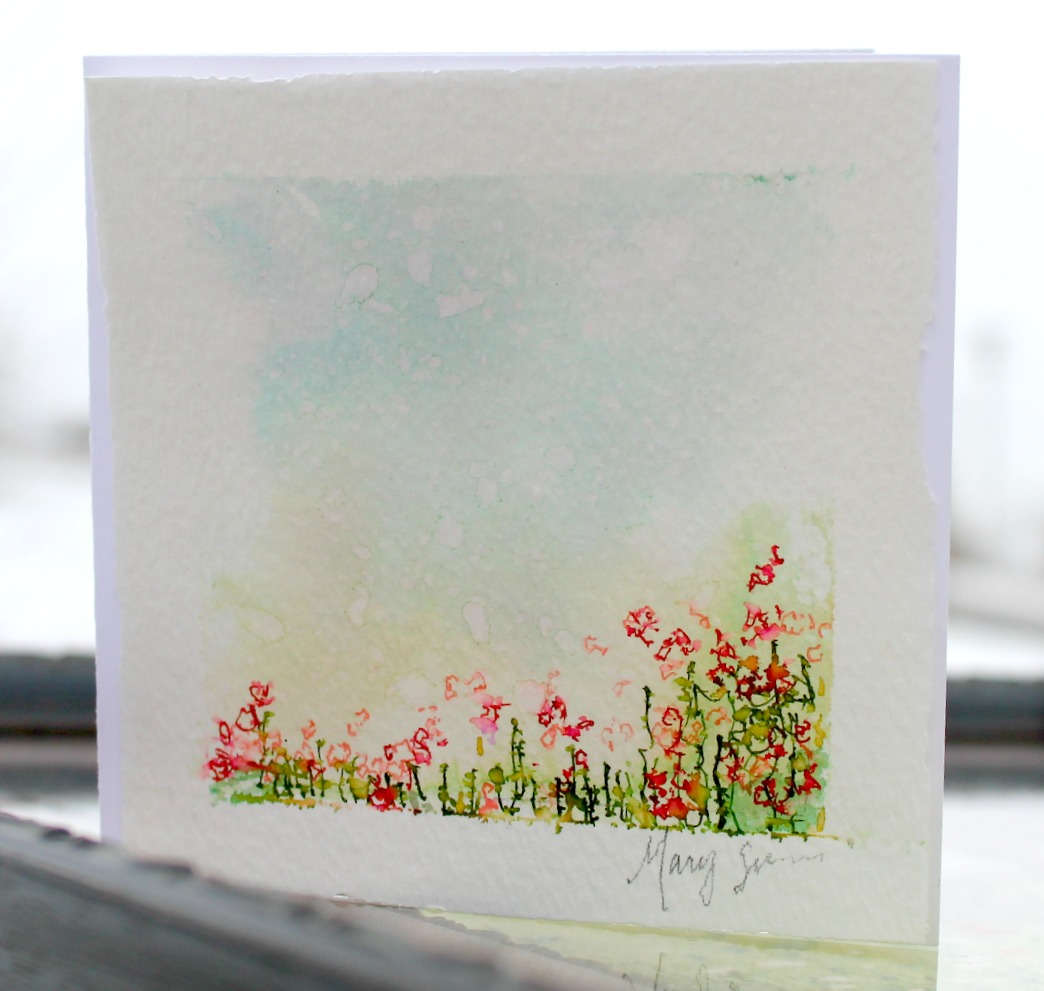 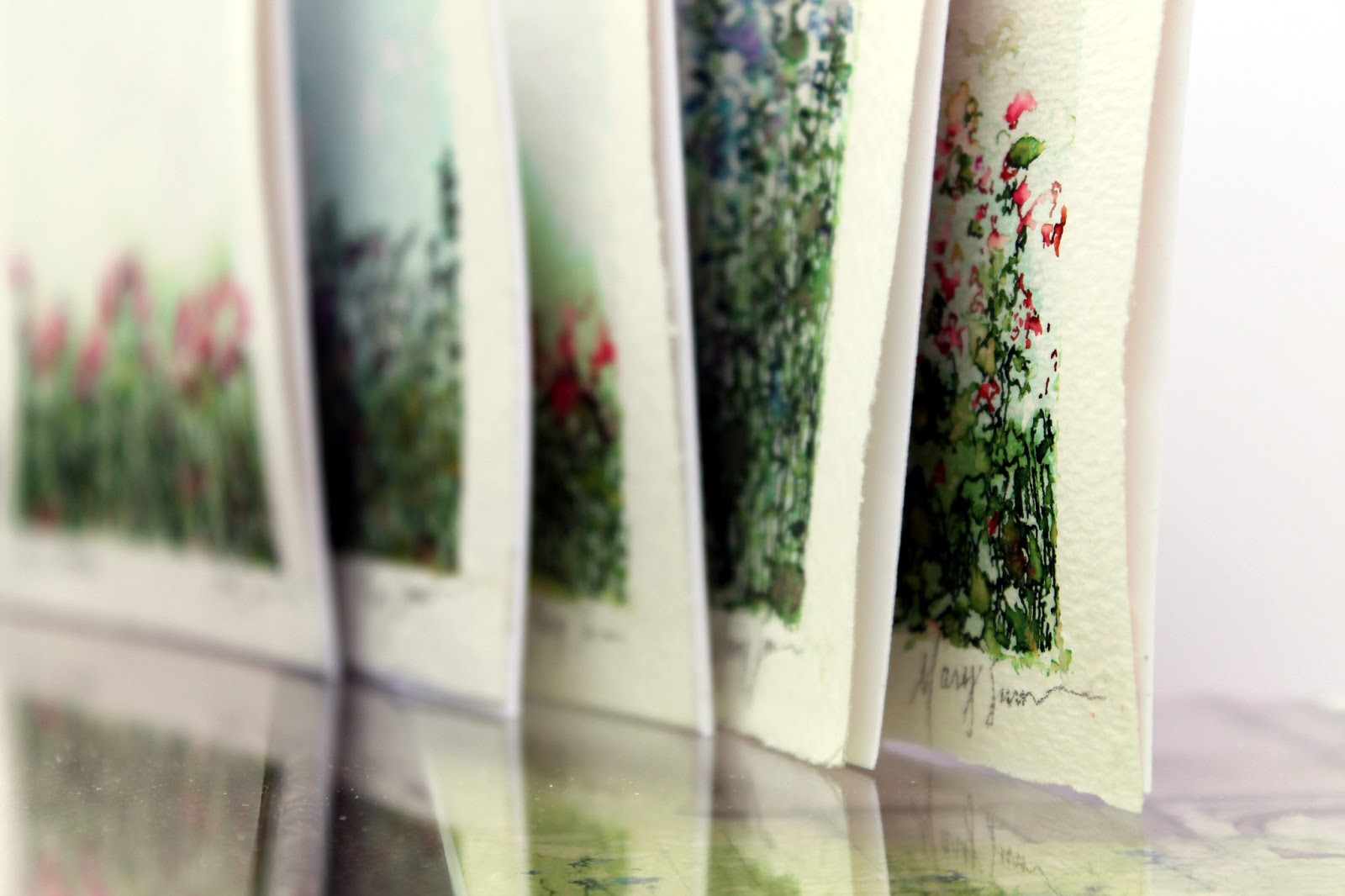 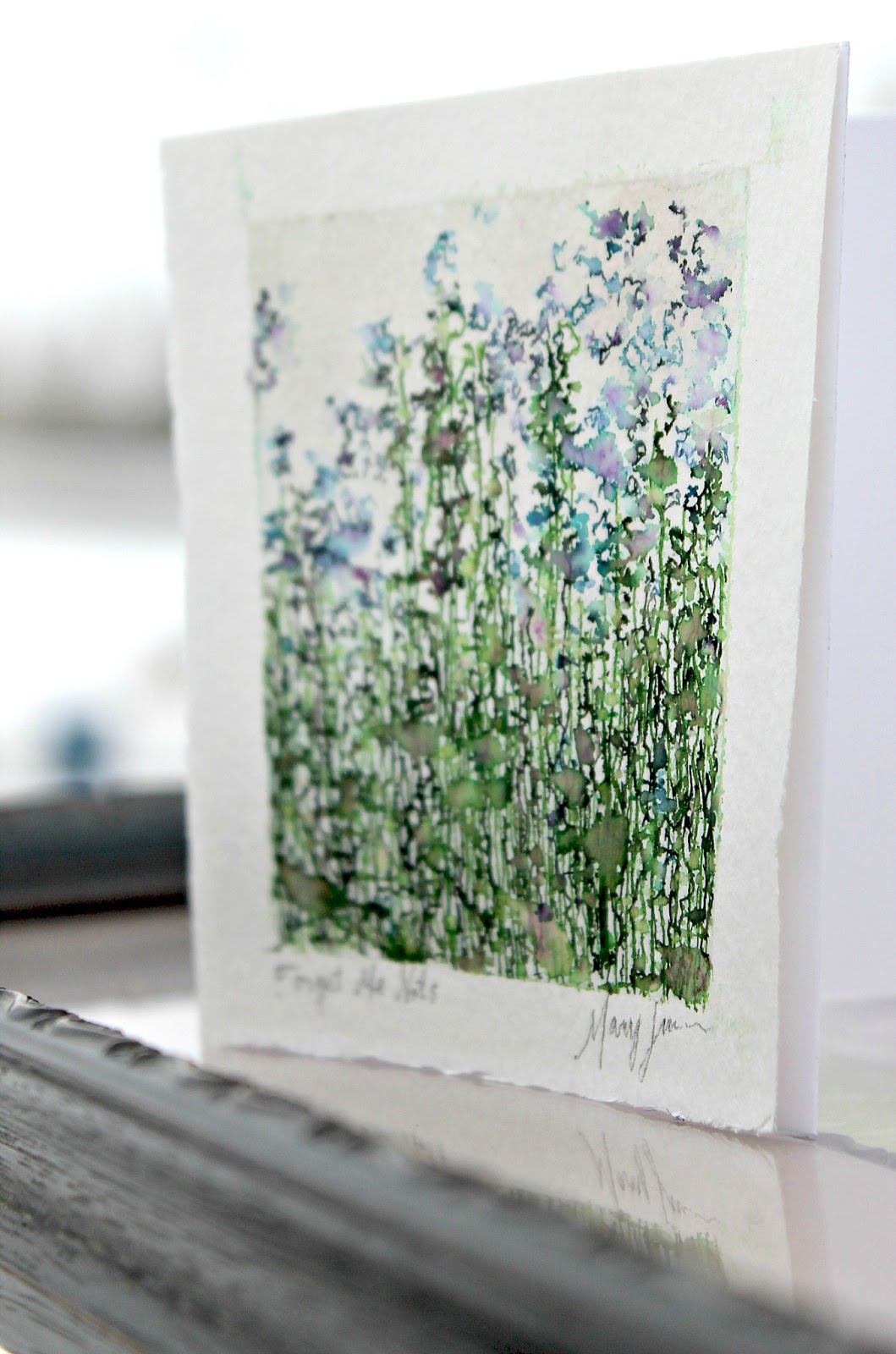 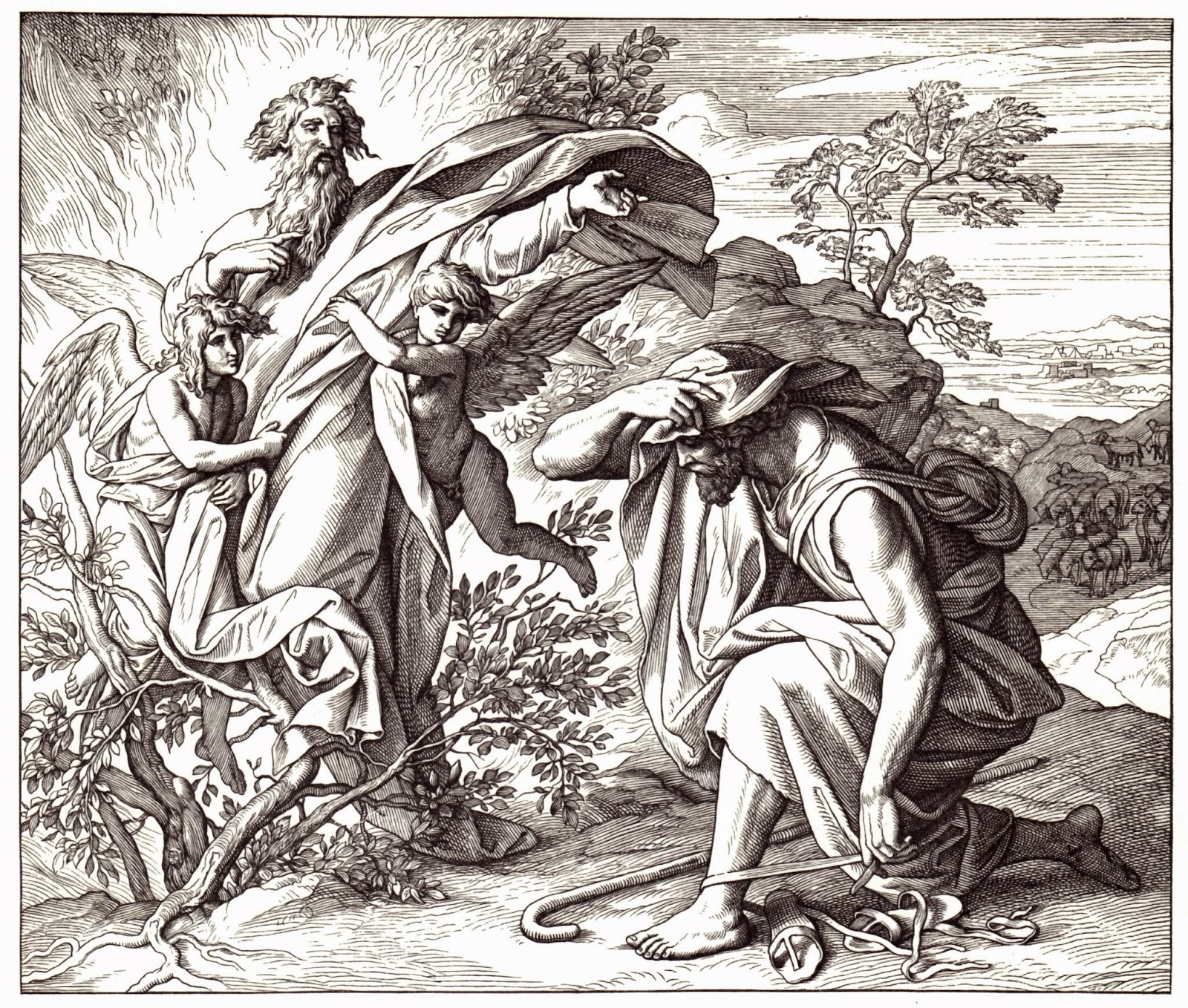 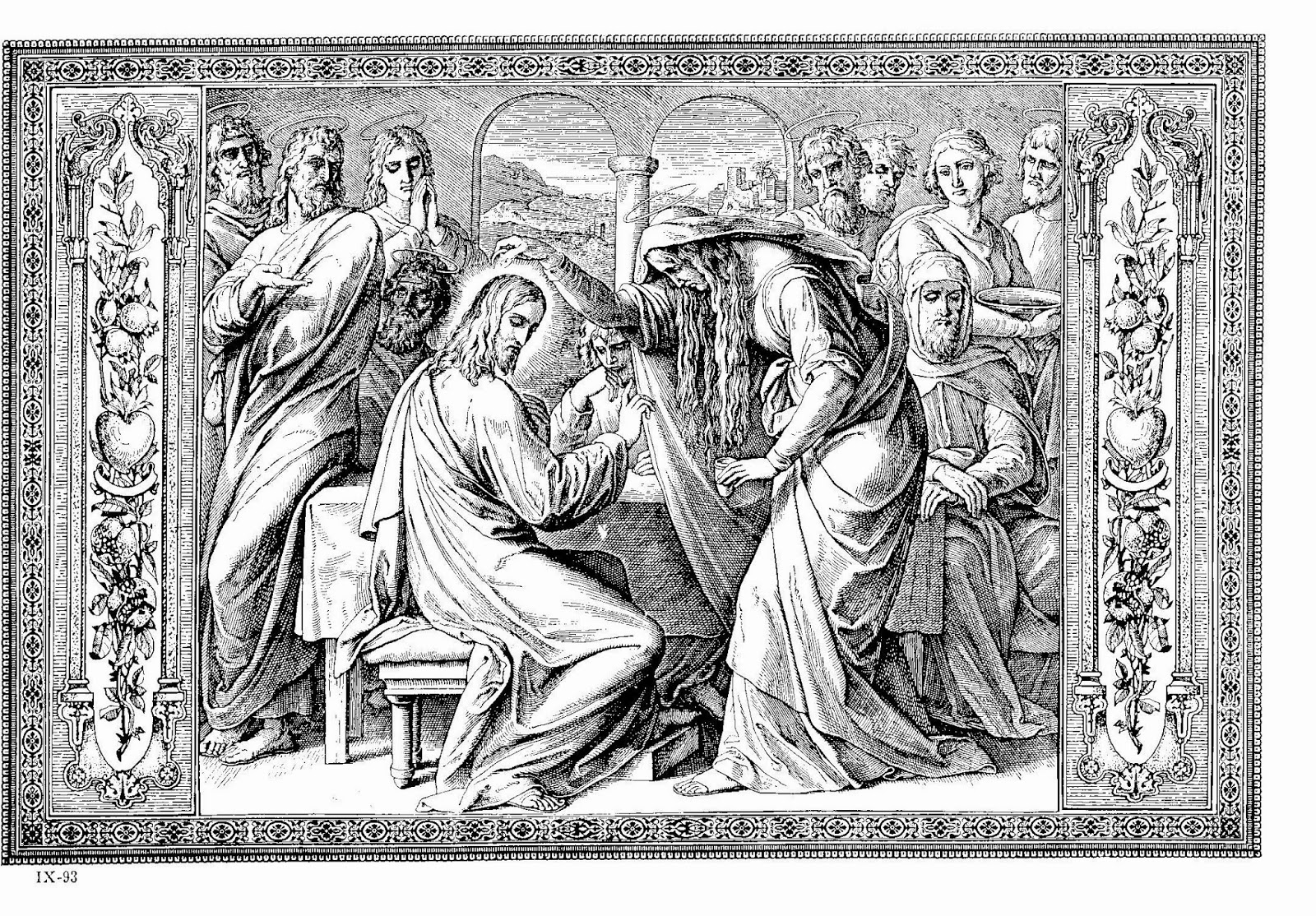 I love these old images.  There is so much happening in this painting that our contemporary artists don't even consider,  from building an eye path, to repetition and rhythm. Sometimes it's just lovely to scroll through and enjoy.
Posted by Unknown at 11:55 AM No comments: 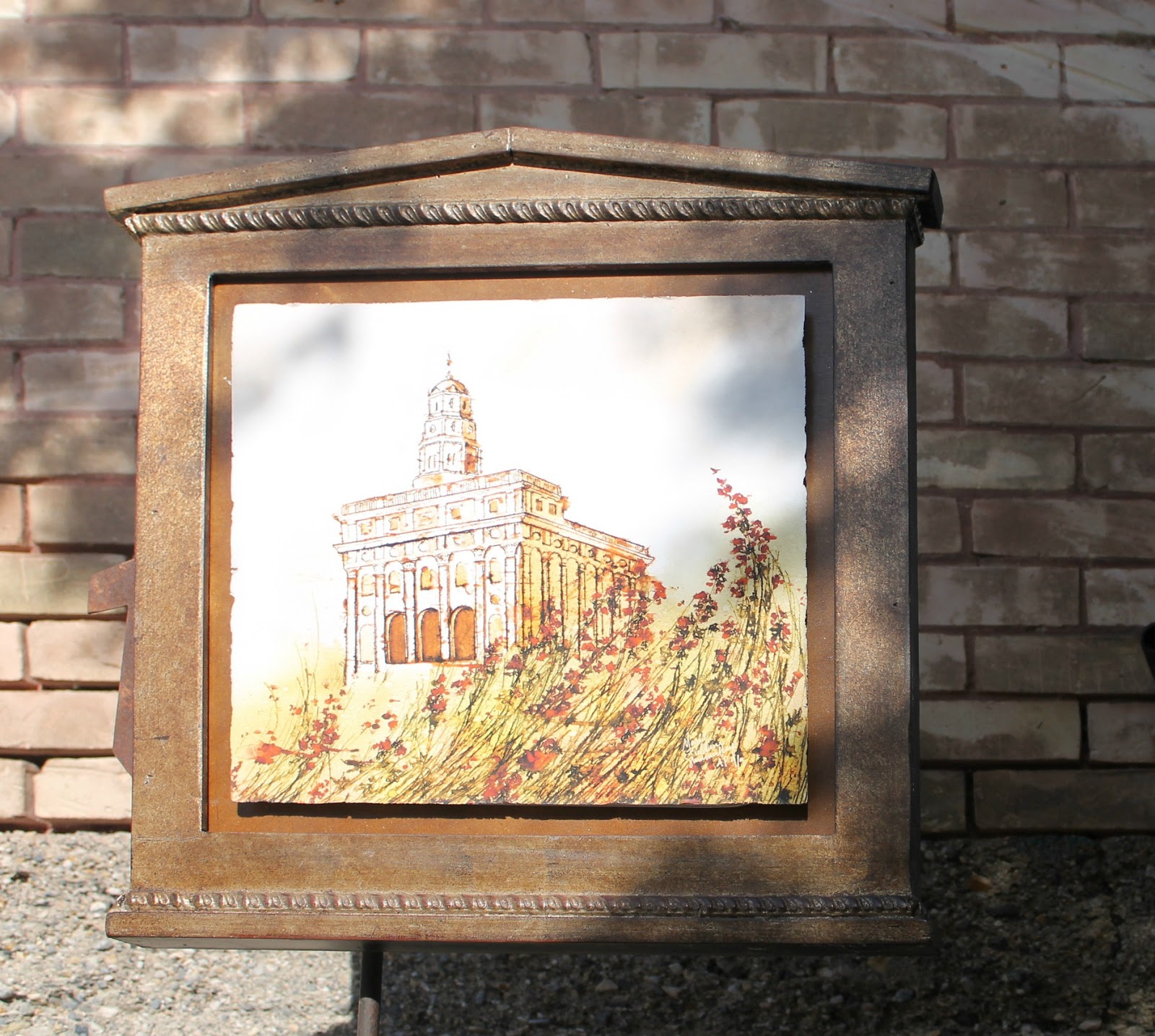 There are some photos of early saints in Nauvoo.  The few photos we have tend to have a lot of watermarks or other marks of history obscuring our views.  It seems the closer that you get to the central player in the restoration, the less opportunity we have to see their images.  My grandfather was one of those people who never had opportunity to get a photo taken.  But I remember as a very young child visiting the Carthage jail, my mother turned up the edge of the rug in the upstairs bedroom and pointed out the stain of his blood on the floor. It was the closest I would ever come to seeing my grandfather's face.

In creating this painting of the Nauvoo temple,  I wanted to capture some of that spirit.  The "true grit" of the saints  who sacrificed everything, so often becoming anonymous because of their sacrifices.  You can see some of the patterns of chaos in the details of this picture.  They symbolize to me the intense sacrifice of men and women of intense courage. Porter Rockwell, saying  I'lll see you in Hell first, and then I won't.  Mosiah Hancock, eating squirel. All the stories we're not allowed to tell because they are too gory.  I wanted to call this piece,  "the blood of our fathers" but the publishers said it was too gory,  and we settled on the current title,  Sacred Memory. 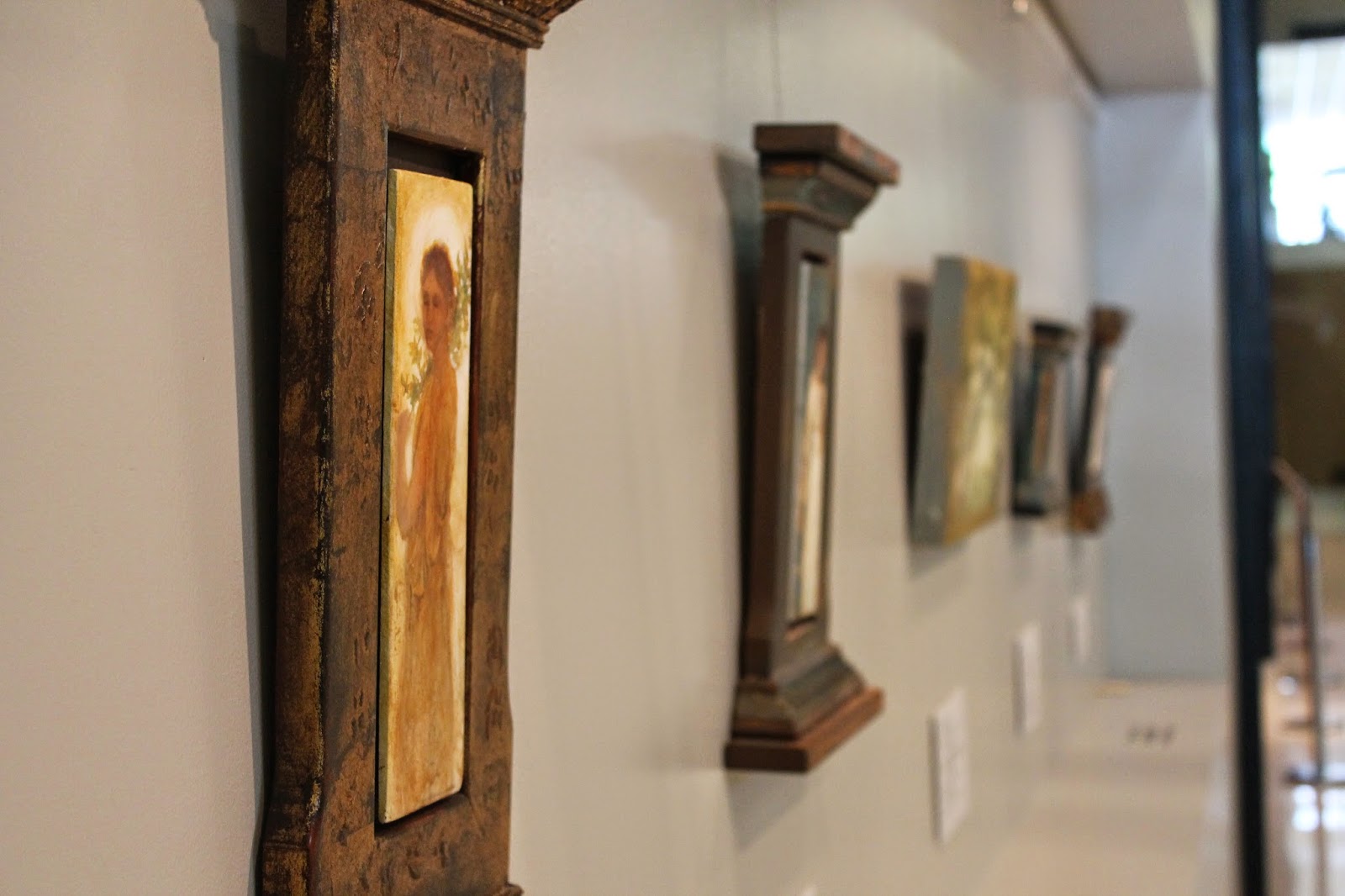 This was a very fun show that I did with Lee Udal Bennion, Kathleen Paterson, and Sally Poet. This is my portion of the show,  a few of the images are described below. 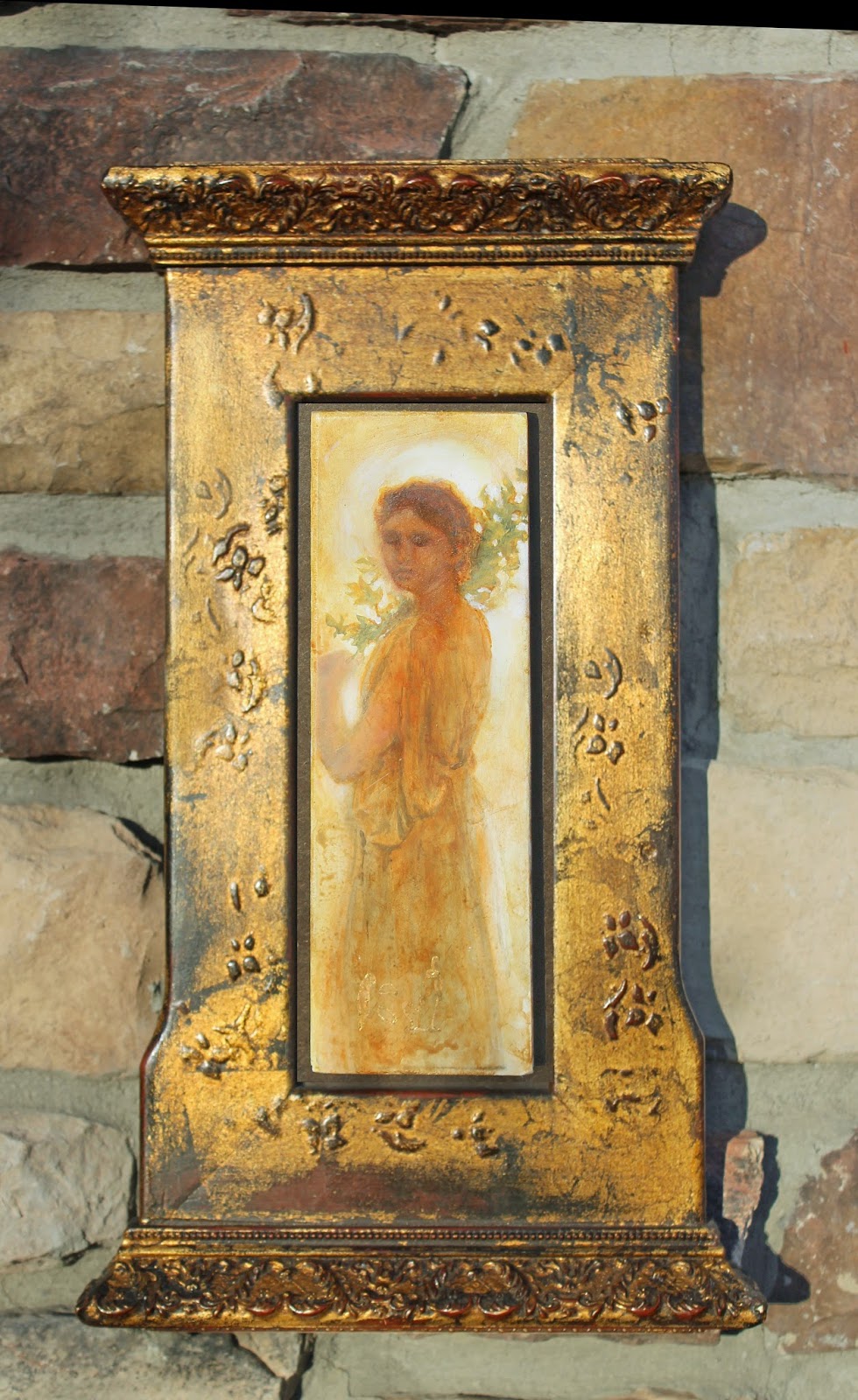 I love this sweet piece,  based upon a phrase from the odes of Solomon, some of the earliest Christian Hymns.  This one comes from ode #20.

"But put on the grace of the Lord generously, and come to His Paradise, and make for yourself a garland from His tree. Then put it on your head and be joyful, and recline upon His rest.  For His glory will go before you; and you shall receive of His kindness and of His grace; and you shall be anointed in truth with the praise of His holiness."


The entire set of odes have been very intriguing to me,  and inspired a series about "the anointing"  a word synonymous with early christianity,  since the very word "christ" and "christian" both come from the Greek work anointed.  This frame was create by Rett Ashby. 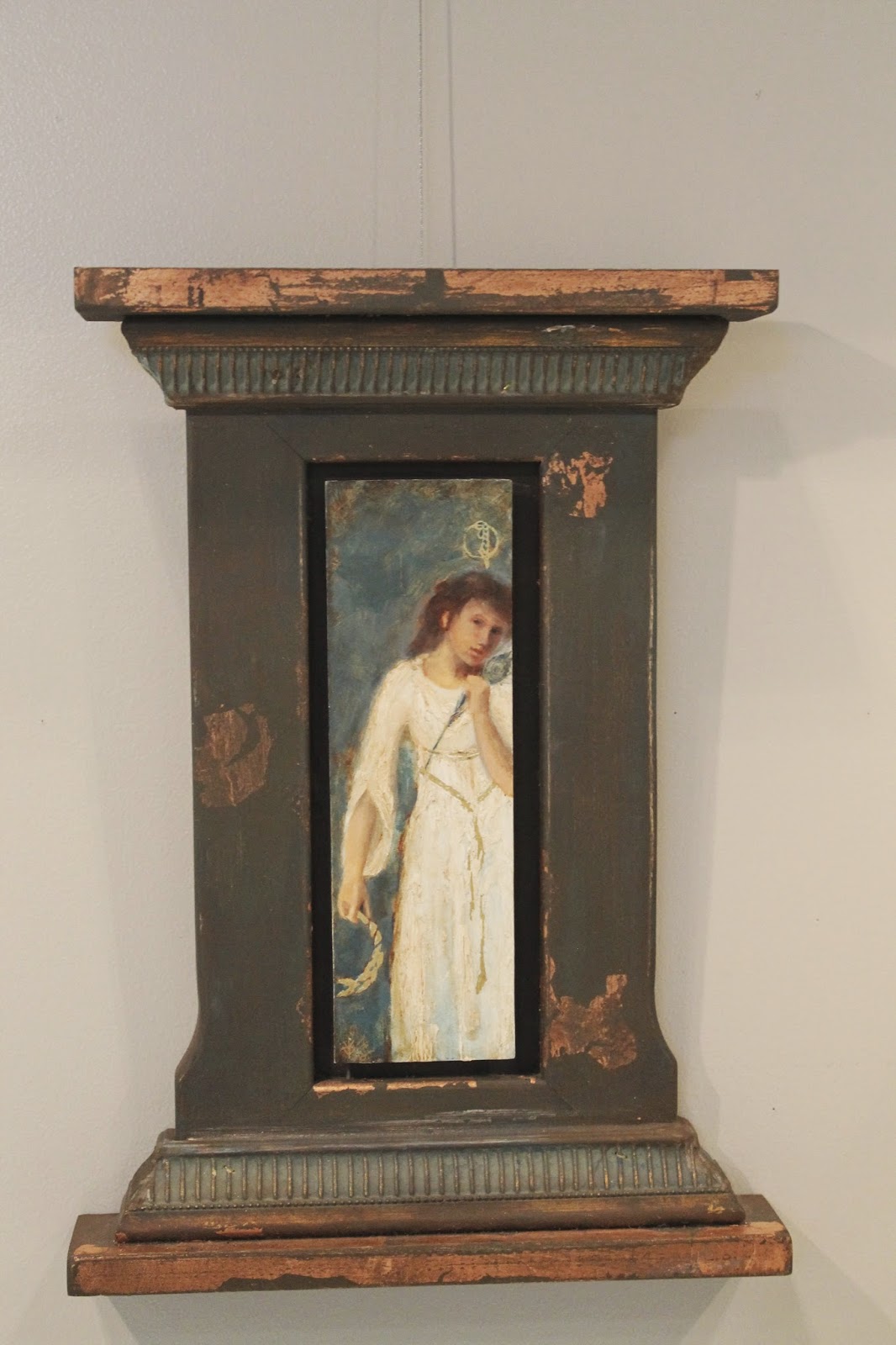 This one is titled, "He that is Joined to Eternity" a poetic reference to the 3rd ode.  Ma'at being synonymous with both Eternity and the female spouse. The osterich feather is the Ma'at symbol,  as can be seen scripted above her head in similar fashion to the Egyptian heiroglyphic vingettes, the laurels being the symbol of coronation for men,  achievable only through the marriage. 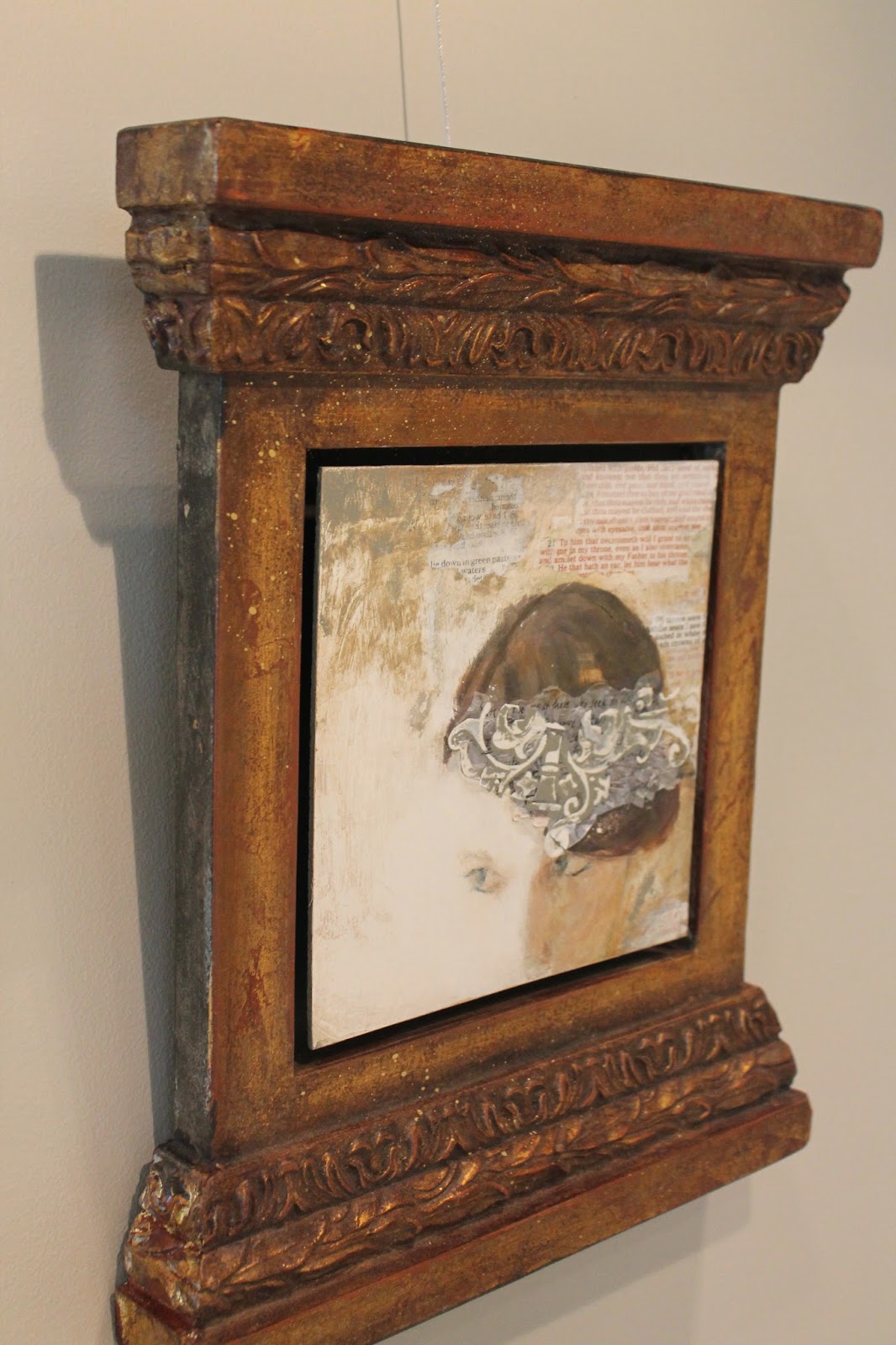 This one is comes from the first ode,  although I prefer the other translation which says the Lord is upon my head like a wreathe,  I will include the full translation from the gnostics:
The reason that I prefer the wreathe translation is the fact that the entire series of odes are not just hymns,  but actually accompanied temple rituals, as Hugh Nibley explains in his fascinating book,  the Message of the Joseph Smith Papyri.  The constant reference to wreaths flowers and garland,  is a doubling of the motifs of coronation with the motif of the Tree of Life,  the later being synonymous both with the Garden of Eden and priesthood sealing ordinances. 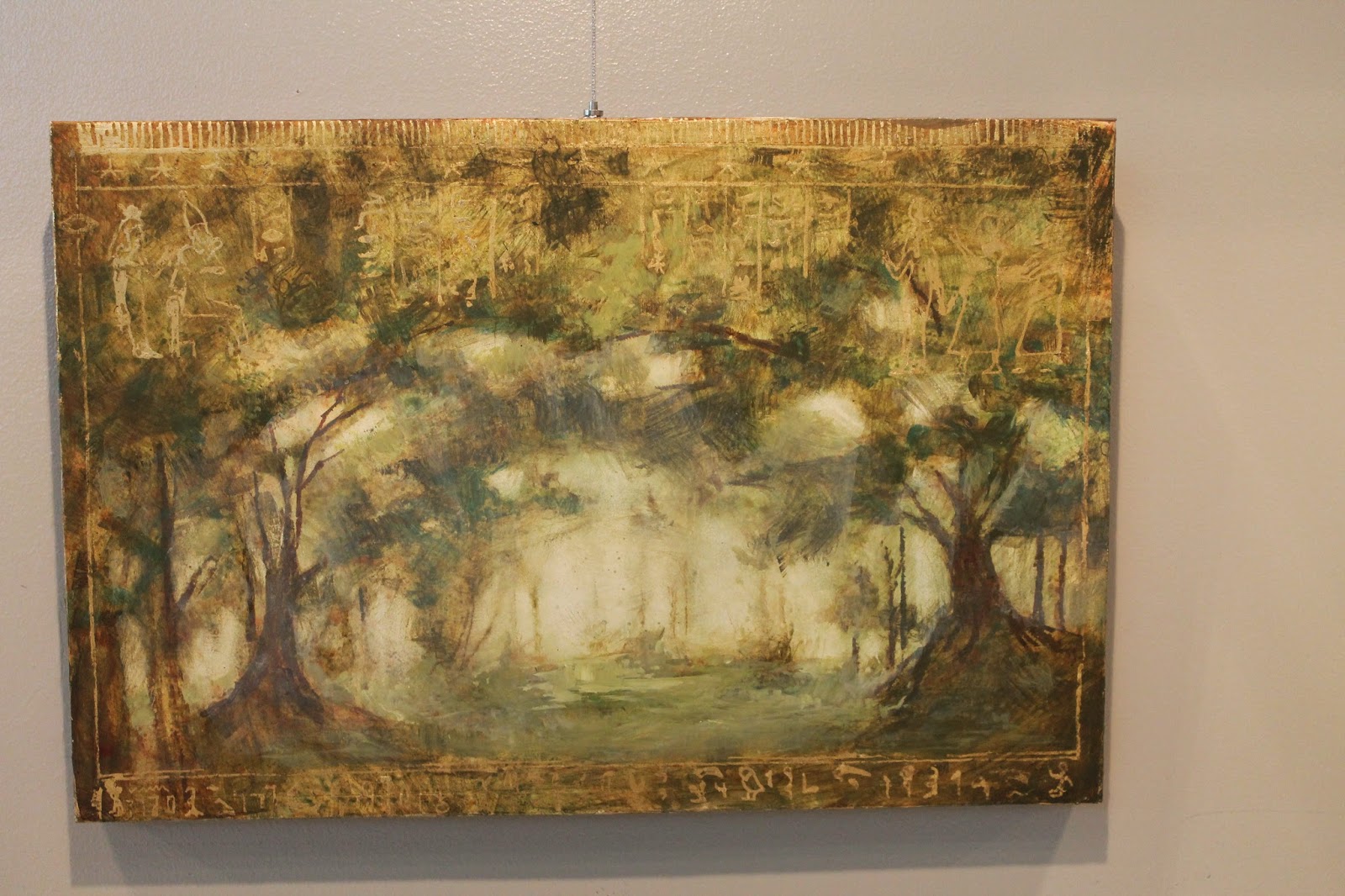 "The Isle of Embracing"  I've described this one in a post after the same name.

The show also included my larger painting Oh Morning Star,  Make a Path for Me,  As well as my "Glorious Mother Eve" painting, which has been explained in previous posts. 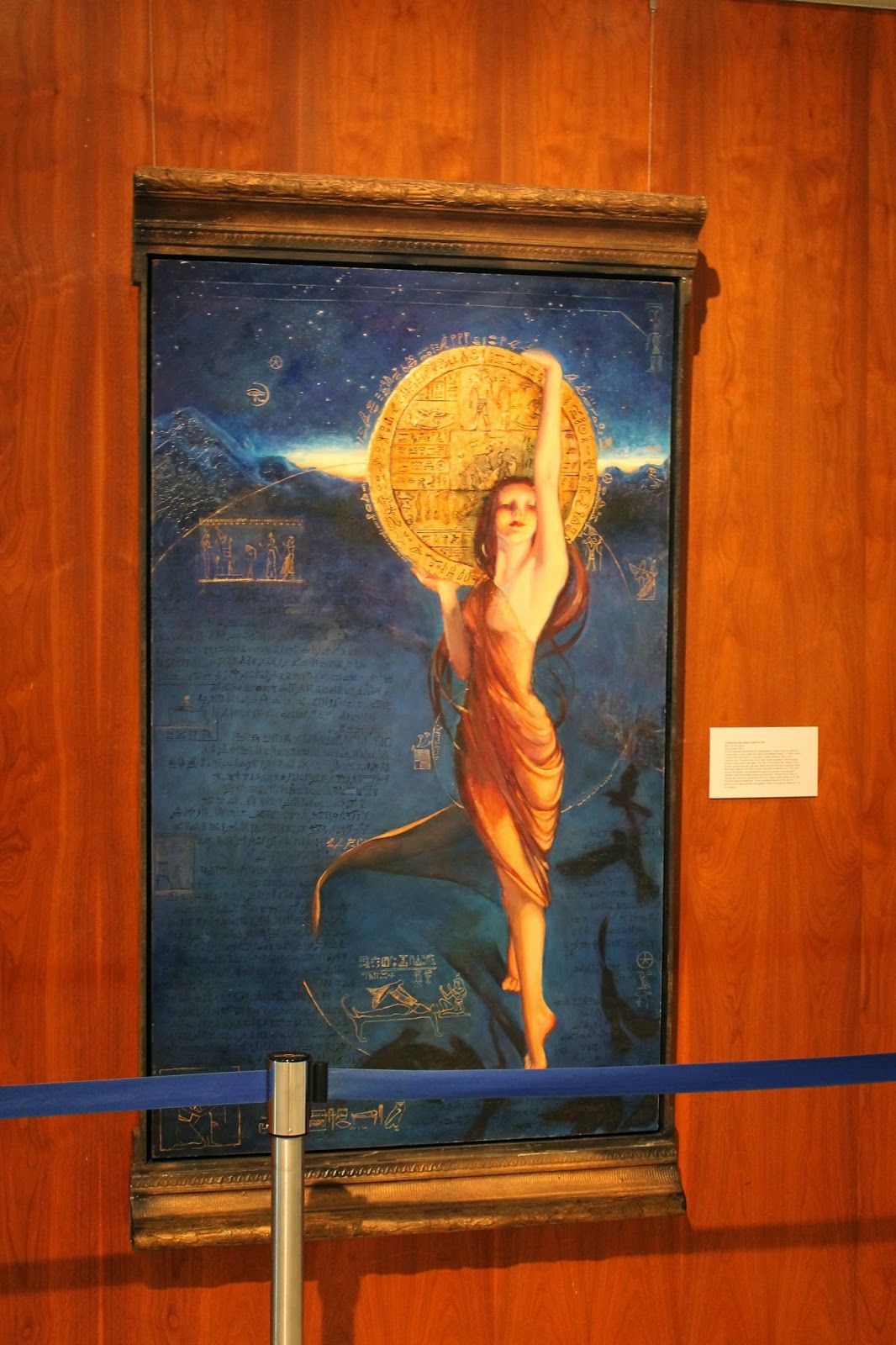 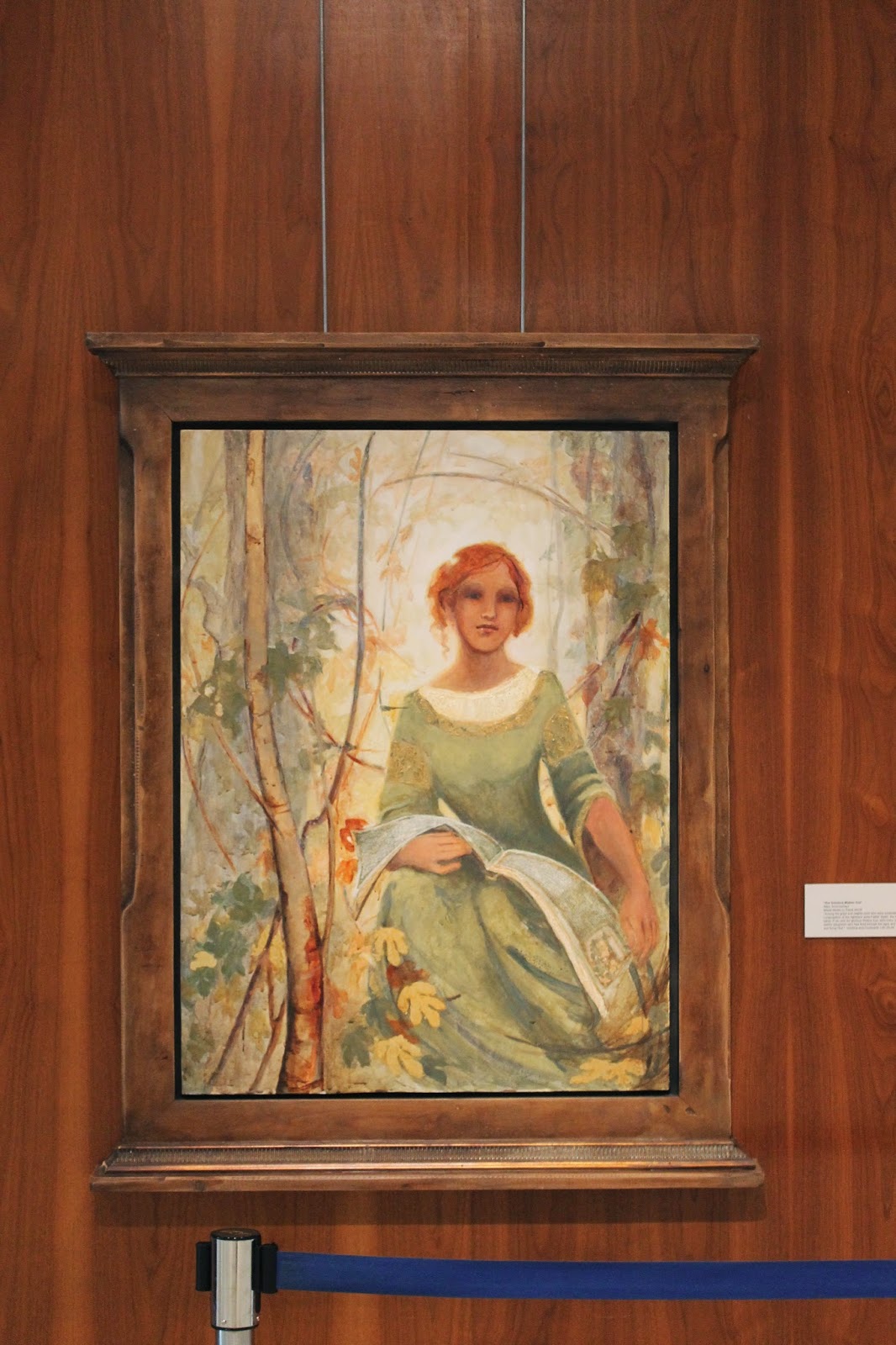 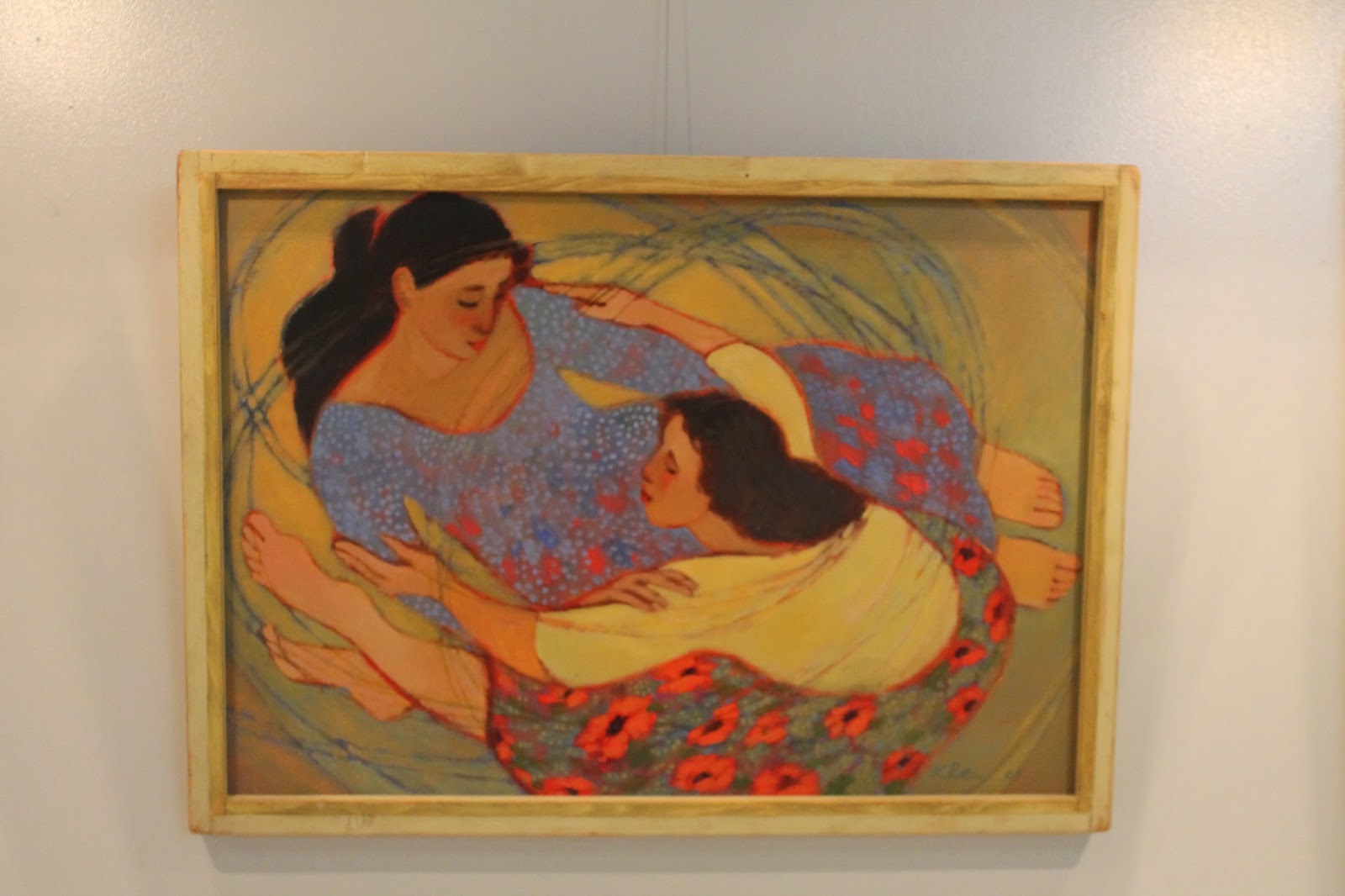 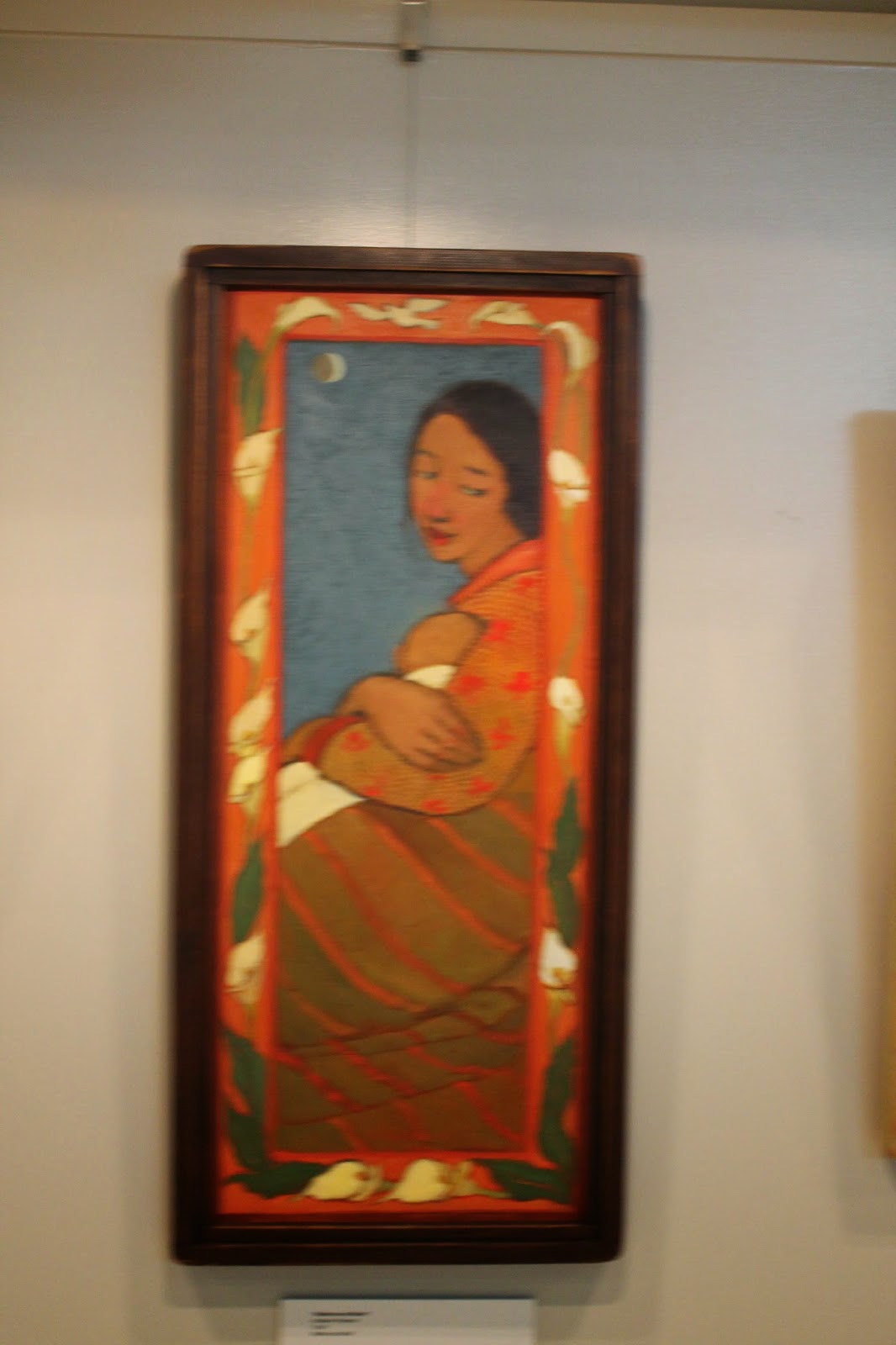 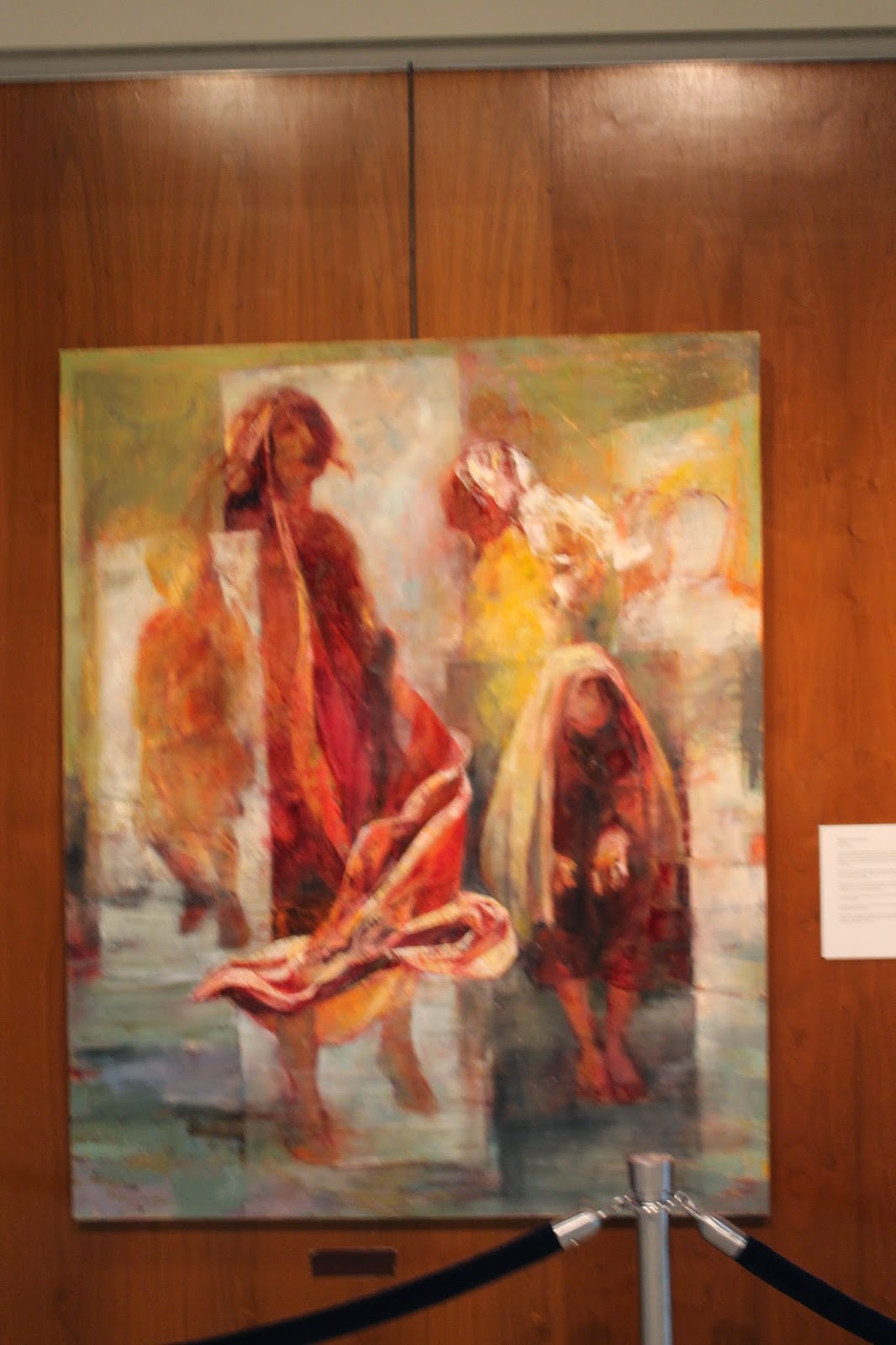 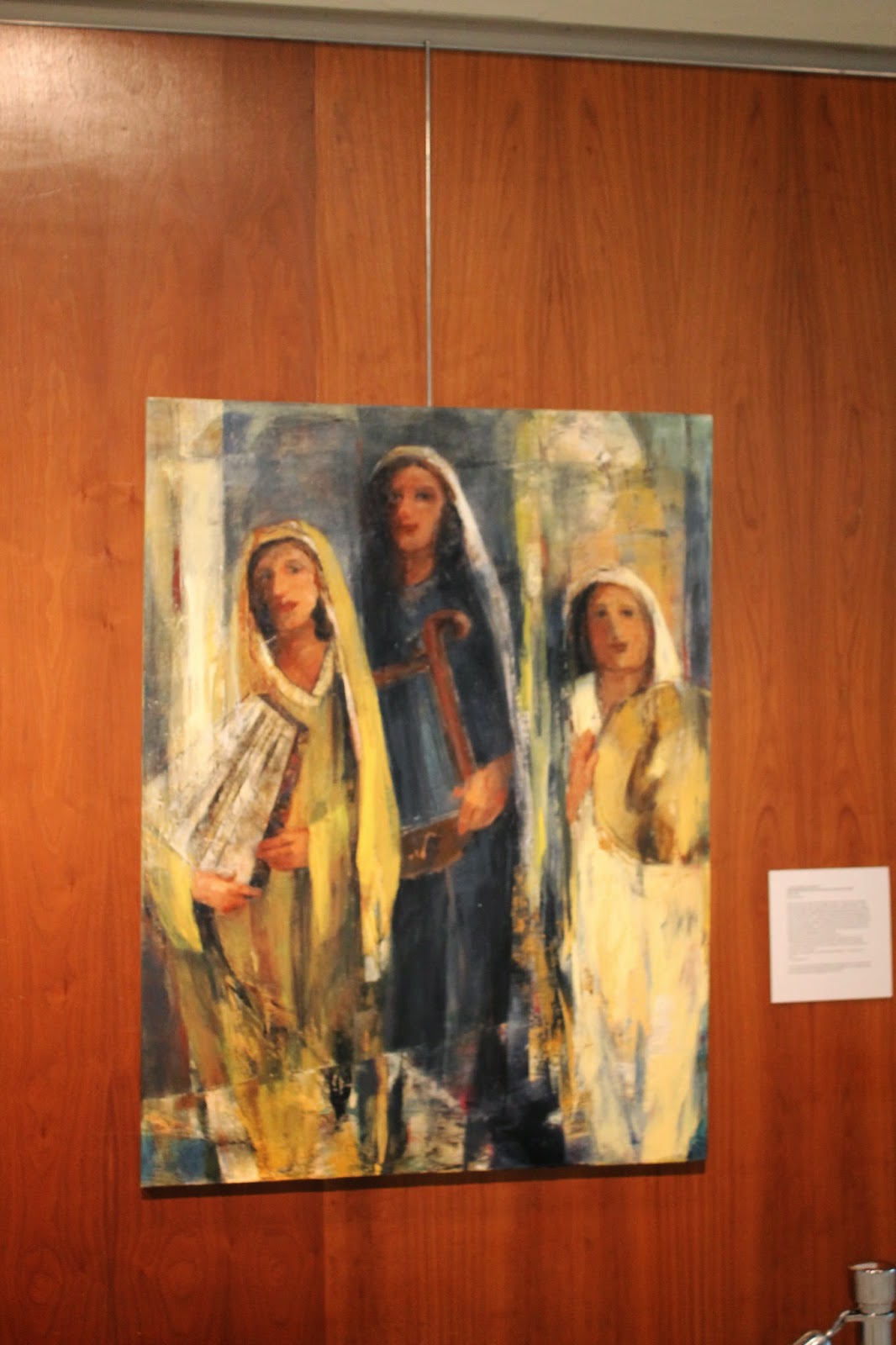 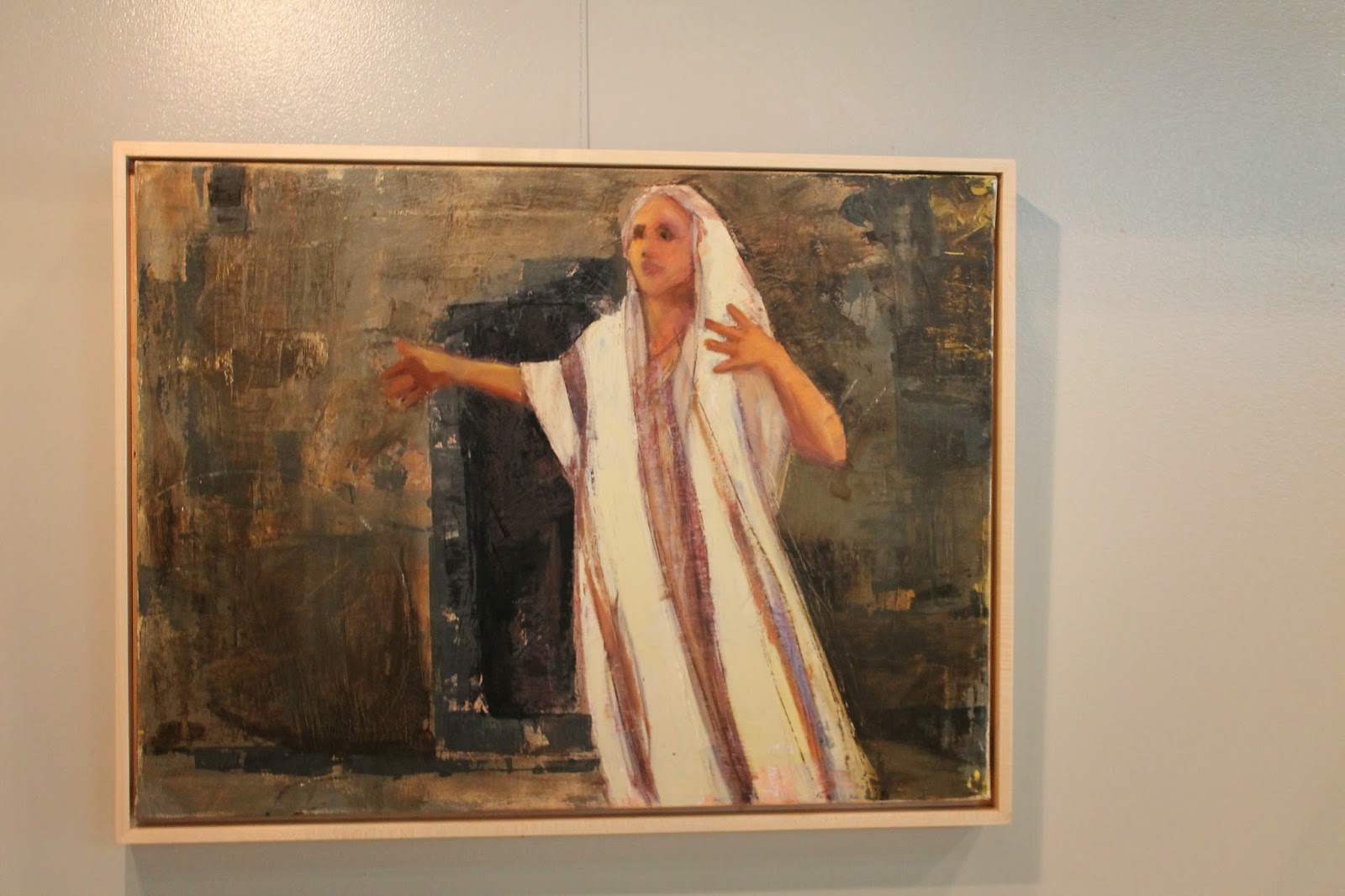 I loved so many of these other paintings, especially the top one by Kathleen Paterson.  It reminds me of "the firm grasp" series that I wanted to do,  but as of yet,  have not had time.  And of course,  Sallie's paintings are incomparable for cool factor.

The Isle of Embracing 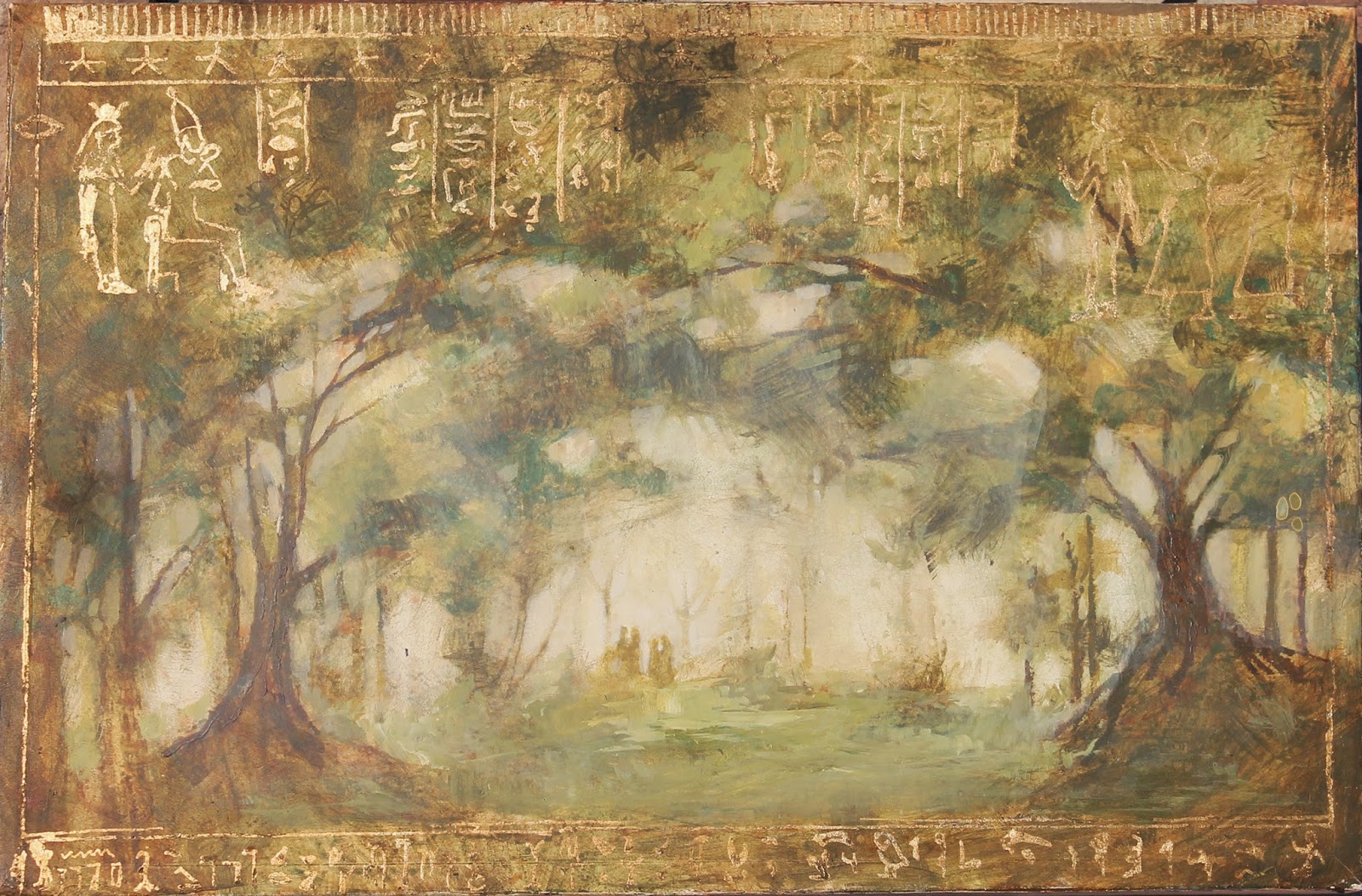 This one is called the Isle of Embracing.
In supremely beautiful storytelling, the ancient Egyptians placed the story of the first marriage, on “the Isle of Embracing”... “a green lotus land,” beneath the life-giving boughs of the noble “ished-tree growing ‘in the Field of Turquoise… in the midst of Heliopolis’“ As Hugh Nibley Explained, it was  “(i.e., in the temple garden).”  It is this garden that brings “the King’s first parents and the first pair on the earth… together at the the New Year––the time of creation––to write the king’s name on the leaves of the sacred tree itself.” (MJSP 304) It is perhaps one of the oldest references to the solemnization of marriage as well as to the building of family tree, but also the ritual that led to the coronation of the king.
Nibley further explains, the young king “takes possession of the land in the manner of Adam exploring the garden, he embraces the Lady, whereupon life springs up out of nothing, the earth bringing forth spontaneously.” (MJSP 305) Egyptian poetry would later share this metaphor with all newlyweds, each becoming a first man, and first woman, each co-creators of their own civilization, poetically stating, “Joy has he whom she embraces, He is like the first of men!”
Scholars assure us that the “idea that the divine marriage must take place in a grove is  found all over the world” (MJSP 304) Greek and Roman traditions follow both the wrestle and embrace of Thetis and Peleus, while the orient celebrates the union of Fu Xi and Nu Wa as bringing life from the garden heights of Kunlun Mountain to the rest of the world. Similarly the “unified, complementing and integrated image of Lakshmi and Vishnu as wife and husband” notes Patricia Monaghan, is "the paradigm for rituals and ceremonies for the bride and groom in Hindu weddings".[10]
We could recite hundreds more examples, but one does not have to study long to realize that these are
all parallel tellings of the Adam and Eve story, a paradigm which seems to find a natural home within
the universal human hunger for origin and purpose.  From Jews to Muslims, Gnostics, Copts, and
Western Christian Civilizations, each reverence a canonised form of this story. Even the Taoists idealize
this male and female “harmonization of opposites” as the “Diagram of Ultimate Power.” 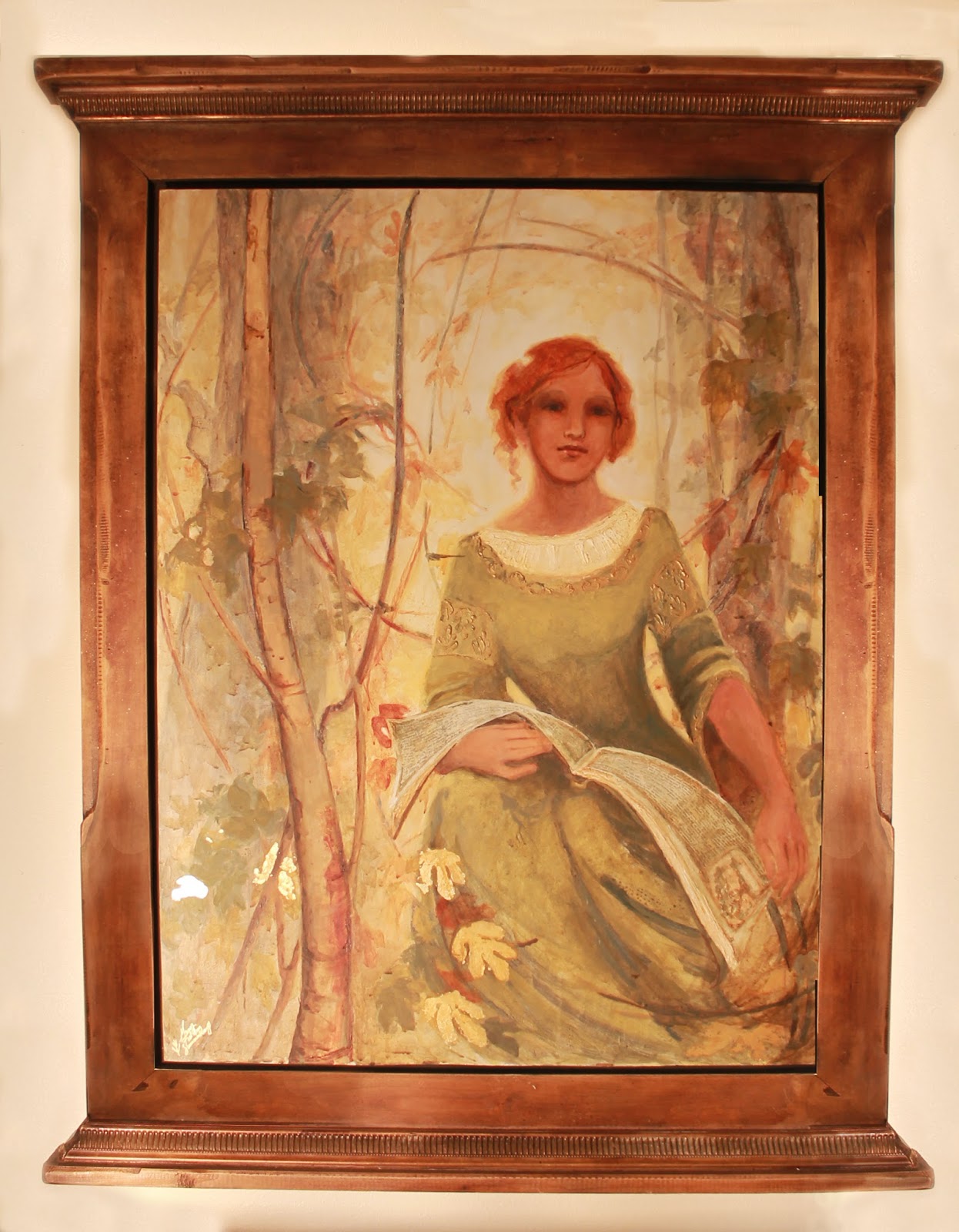 This piece has been an iconic part of my heart for so long now.  It seemed to identify for me  what it was that I was trying to say and accomplish as an artist. Selling something so close to my heart felt a bit like placing a child for adoption.  Although I could not be happier with it's new home, (Stain glass artist Tom Holdman and his beautiful wife took it home from the Joseph Smith Memorial Building,)  I still am somewhat melancholy about the empty space in my studio, as well as the prospect of being guided only by memory of the piece where meaning, medium, purpose, metaphor and calling, everything clicked.
Posted by Unknown at 10:40 AM No comments: